Witch’s apprentice Bridey Corkill has hated the ocean ever since she watched her granddad dive in and drown with a smile on his face. So when a dead girl rolls in with the tide in the summer of 1913, sixteen-year-old Bridey suspects that whatever compelled her granddad to leap into the sea has made its return to the Isle of Man.

Soon, villagers are vanishing in the night, but no one shares Bridey’s suspicions about the sea. No one but the island’s witch, who isn’t as frightening as she first appears, and the handsome dark-haired lad Bridey rescues from a grim and watery fate. The cause of the deep gashes in Fynn’s stomach and his lost memories are, like the recent disappearances, a mystery well-guarded by the sea. In exchange for saving his life, Fynn teaches Bridey to master her fear of the water — stealing her heart in the process.

Now, Bridey must work with the Isle’s eccentric witch and the boy she isn’t sure she can trust — because if she can’t uncover the truth about the ancient evil in the water, everyone she loves will walk into the sea, never to return.

“Fear the Drowning Deep is gorgeous. Lyrical. Atmospheric.
Magical. Sarah Glenn Marsh’s debut is perfect for anyone who’s
ever looked out at the sea with awe, and wondered what kind of
creatures lurk in the deepest places. Utterly haunting.” —Jodi
Meadows, author of the Incarnate trilogy, the Orphan Queen
duology, and My Lady Jane

“Beautifully-written with mysteries and love lurking within the pages as dangerously as an ancient evil waits in the drowning deeps of Sarah’s unique setting on the Isle of Man. Don’t miss this one!” —Martina Boone, author of Compulsion and the Heirs of Watson Island trilogy

“Readers will be swept away by Bridey’s love story, every bit as thrilling and mysterious as the Isle of Man’s deep, dark sea.” —Tricia Rayburn, author of the Siren trilogy

“Sarah Glenn Marsh’s debut is a captivating tale of love and loss, fear and doubt, monsters of the sea and inside ourselves, and the strength it takes to endure and conquer them all. Hauntingly written with a richly developed setting of the Isle of Man in the early 1900s, you can smell the salt of the sea with every page you hungrily turn.” —Lori Goldstein, author of Becoming
Jinn and Circle of Jinn

“Fans of folklore-influenced YA will find this to be a satisfying use of familiar material.” —NPR

“[T]his watery take on “Beauty and the Beast” will be catnip to paranormal-romance readers.” — Kirkus Reviews

A companion novel to Fear the Drowning Deep, an NPR Great Read of 2016.

That’s what seventeen-year-old barmaid Liss Corkill does. She’s never cursed or kissed a boy, and until two years ago, when a mythical serpent kidnapped her, she was never late to anything. She knows that if she were like her free-spirited older sister Bridey who sailed to America just before the Great War, her mother would be devastated. Liss is determined to be what everyone expects, even if that means giving up her dreams.

Unless the faeries make you break them.

When Liss accidentally interferes in a fairy queen’s quest for true love, she’s pulled into the vast and dangerous world of Un-Mann, a magical realm as old as the Isle of Man itself. As punishment for her mistake, Liss must complete three tasks for the queen by the night of the Great Harvest Moonlight, the fairies’ biggest yearly celebration.

Or you find something worth dying for.

Liss’s attempts to complete her tasks are met with constant misfortune, as if someone doesn’t want her to win. But she has powerful friends: the town witch, Morag, and her sister’s best friend, Cat, who she’s secretly falling for as they hunt sea monsters by night to protect their home. Sensing a need for inspiration as the final gruesome task draws near, the queen marks Liss’s little sister for death unless Liss succeeds.

Her sister. Her town. Her dreams. If she can’t own who she is and make some new rules, Liss will lose it all.

Through the restless fog of a cool summer’s night, behind white-capped waves breaking over a sea as dark and thick as spilled ink, something stirred in the water. Taunting me.

The siren had already killed one man, a relative of the Kinry family who had journeyed from the other side of the isle to celebrate the festival of Luanistyn, the beginning of the harvest season. If we didn’t stop the heartless creature now, more victims—and panic the likes of which sleepy Port Coire hadn’t seen in nearly two years—were sure to follow.

I tightened my grip on my spear, ignoring the ache in my chapped hands from washing dishes all day at the tavern, and hurried down the beach after Morag as fast as I could with my left leg dragging slightly behind me. Thanks to the serpent, it would never be the same, but at least I could walk again—and now, sort of run.

Small victories kept me going at the worst of times.

Cold sand oozed between my toes as I neared the water and saw her at last: the siren, her scaly green face framed by a halo of blue-green webbing, surfacing just long enough to hiss at me with a mouth full of fangs peeking through blackened lips before disappearing.

Whoever started the rumor that sirens resemble beautiful women was either joking or really needed their eyes examined. Even the drawings in Morag’s bestiary weren’t quite right—they made the sirens look too much like dragons, not human at all, when the reality was somewhere between person and cold-blooded scaly beast.

We’d been tracking this particular siren all summer, hoping to frighten her away and avoid any bloodshed. But last night, she’d chosen her fate when she drowned that poor man and tore out his innards after luring him into the sea with her sweet song of illusion that made her appear irresistibly beautiful.

She wasn’t singing for us tonight, though. I don’t know if she spotted the cotton stuffed in our ears, muting the crash of the sea against the rocks, or if we just didn’t look good enough to eat. Either way, it was clear she wasn’t going to come to us—we would have to follow her into the water, where she could fight in her element. On her terms. Much as I hated to admit it, I respected her for it.

Morag was already scrambling over the rocks ahead, making her way out to sea without so much as a glance over her shoulder. I’d proven more than once this summer that I had her back, thanks to a pair of nasty bugganes who had taken up residence in nearby sea caves.

Why was Morag moving so quickly tonight, though? Had something besides the siren caught her eye? Squinting into the fog, I could just make out the wolf gray of my mentor’s hair some thirty feet away. Out of reach.

My pulse quickened at the thought of how little time the siren would need to pull her under. Of course, Morag had a spear, too. She knew the risks. We might not talk about it, but the very real possibility of death wrapped its icy hands around our throats each time we planned our next outing, making it harder and harder to lie to Mam about picking up a late shift at the tavern so Morag and I could do what no one else would: protect the town. Look danger in the eye instead of dropping our gazes and hoping it would retreat on its own.

Morag cried out and fell, dropping her spear with a clatter that reverberated in my bones. Had she slipped? Or was she pulled by a swift and venomous hand? I could barely see her prone form through the fog, but one thing was all too clear: the siren’s hissing, grinning mouth; her forked tongue flicking over cracked lips; her clawed hands stretching toward the rocks as she bobbed within spitting distance of our town’s resident witch. My boss. My friend.

“No!” I dashed toward them, using my spear to help me balance as I leaped from rock to rock, inhaling mouthfuls of salt and brine as sea-foam sprayed my face.

The next rock was a greater distance than I’d jumped since before the serpent attack, and I came down too hard on the landing, put too much weight on my left leg. It gave a sharp twinge as if to punish me, pitching me forward. My spear fell as I flailed my arms like a pinwheel, desperate not to fall face-first into the churning midnight sea. I didn’t think I could fight off the siren with my bare hands, let alone tread water long enough to be rescued. Especially since no one knew we were out here.

My body braced for the fall, but strong hands grabbed my arms and pulled me upright, holding me just a second longer than necessary. “No one’s going swimming tonight,” a familiar voice teased, the tone light and sweet but leaving no room for doubt.

“Cat!” I gasped, gratefully leaning into her arms while I waited for my jelly legs to turn solid again. “How did you—?” I stop myself as I remember through the haze of adrenaline why I almost fell. “The siren, Morag—!”

“Relax, would you? You’re going to give us both stomach ulcers, and then I won’t be able to eat the shepherd’s pie I made this afternoon!” Morag called gruffly, the mighty breath of the sea and the cotton in my ears reducing her bellow to a whisper. “I’m fine. The siren’s dead. The fall was part of my act. I’m telling you, Liss, improvisation is a lost art. I needed her to think me feeble so she would come close enough to— Ah, Catreena! Good of you to join us.”

The fog parted enough for me to make out Morag’s shadow as she pulled her spear from the siren’s throat and gently pushed the slimy green corpse into the water. “Eat up, fishes,” she cackled, watching the current carry the body away. 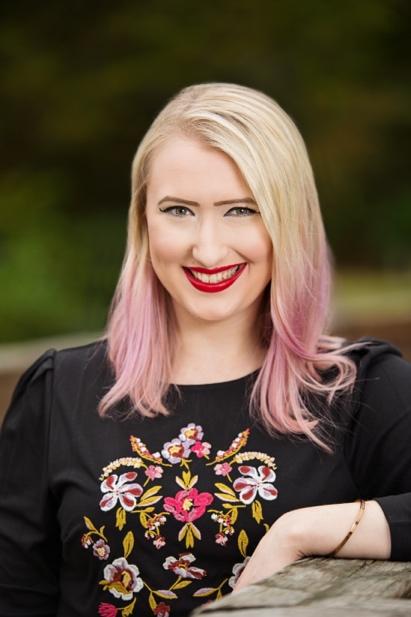 Sarah Glenn Marsh is an author of young adult novels including the Reign of the Fallen series and Fear the Drowning Deep, as well as children’s picture books like A Campfire Tail, Ninita’s Big World (an Amazon Best Book of 2019), Alice Across America, and many more. An avid fantasy reader from the day her dad handed her a copy of The Hobbit and promised it would change her life, she’s been making up words and worlds ever since. She lives in Virginia with her husband and their tiny zoo of four rescued sighthounds, two birds, and many fish.

When she’s not writing, she’s often found in the pottery studio, volunteering her time to sighthound rescue, raising awareness about Type 1 diabetes, or engaged in nerdy pursuits from video games to tabletop adventures. You can visit her online at www.sarahglennmarsh.com, and follow her on Twitter @SG_Marsh.

SARAH’S OTHER YA WORK 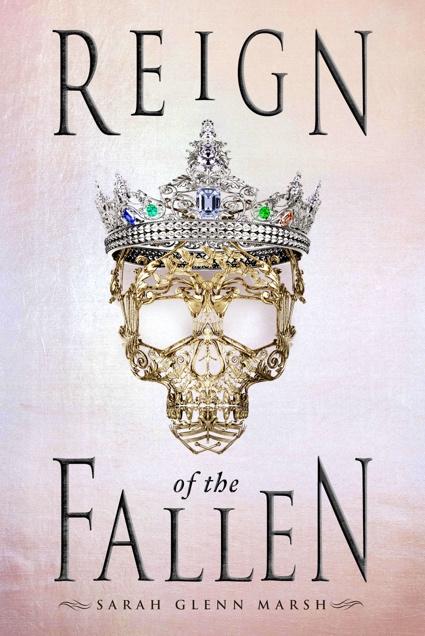 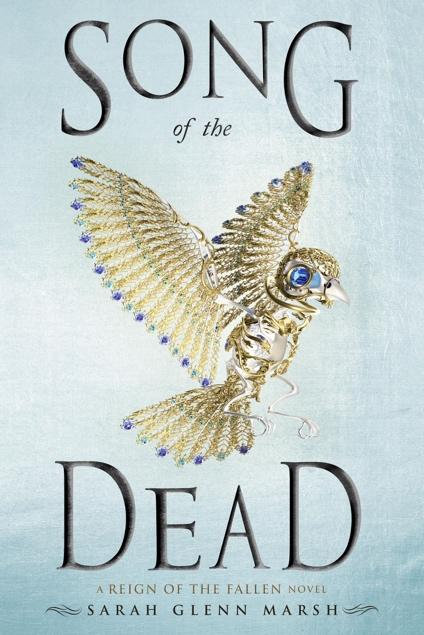