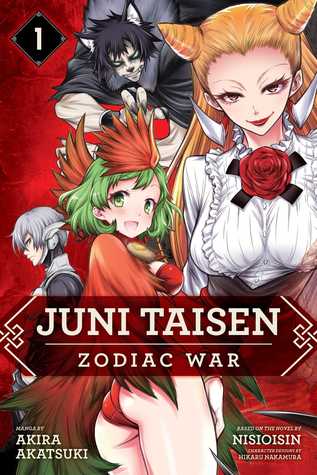 Series: Juni Taisen Manga #1
4/5 books
Amazon * Barnes & Noble * Goodreads
*I received an e-arc of this book from the publisher in exchange for an honest review*
*******

Twelve fighters enter, one fighter leaves—who will win the 12th Zodiac War? Every 12 years, 12 fighters take the form of the Chinese zodiac and engage in a battle royal. With their strength and mysterious powers, they fight to the death and the sole survivor is granted the ultimate prize—any wish. Eleven of the twelve fighters have gathered, and everyone awaits the final contender—Boar. She is strong, confident and a favorite to win the twelfth Zodiac War. However, this time, the rules have changed! The battle is limited to an abandoned city and all of the contestants are forced to ingest a deadly poison. Monkey tries to call a truce, but before she can the floor explodes, scattering all the fighters. Despite the chaos, one thing’s for sure—only one will remain standing.

I’ve seen the anime for this series, and I’ve read the Light Novel, so of course I had to see how the manga faired.

There are the 12 signs of the zodiac, each one represented by a different person who has special skills, be it being a drunken fist fighter, someone who can use guns without the need to reload them at all or being able to communicate with birds.

The story starts off with the 12 fighters first meeting face to face before the battle, an entire city of 500,000 people have been evacuated just so this battle can take place.

Each warrior is told by the “host” of the event that they need to swallow a gem, which they are later told is filled with a poison. Not only that but the warriors need to acquire these gems to show who the winner is.

At this point it’s revealed that they will need to kill each other, and the last one standing clearly is the winner and will have one wish granted.

A few minor things are different between the 3 venues so far. Main one is that there is someone who is there to record the events; he goes by the name Navi. There is no mention of Navi in the anime or the Light Novel.

Some of the background info on the fighters is cut very short in the manga. It’s explained in more detail between the anime and Light Novel.

Of course the action and spilled blood will be more expressed in the anime since that’s much more visual.

Like I mentioned I’ve seen the anime and read the book, so I know who the last warrior standing is, and I still have fun reading the manga to see how the story is depicted.

The Fighter of the Dog: Kills with Bites

The Fighter of the Monkey: Kills in Peace

The Fighter of the Horse: Kills in Silence

The Fighter of the Dragon: Kills for Money

The Fighter of the Tiger: Kills with Drunken Power

The Fighter of the Ram: Kills Inexorably

The Fighter of the Boar: Kills in Abundance

The Fighter of the Chicken: Kills with Pecks

The Fighter of the Sheep: Kills with Deception

The Fighter of the Snake: Kills for Money

The Fighter of the Rabbit: Kills with Distinction

The Fighter of the Ox: Just Kills

By the end of the first volume 3 of them are dead, the others don’t hold back on their punches.

If you area fan of Shonen anime/manga I recommend checking this one out.